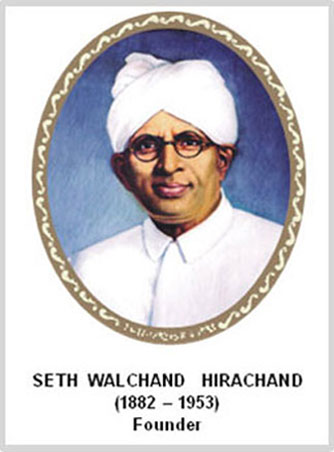 “The patriotic industrialist whose life was a triumph of persistence over adversity”. -Sardar Vallabhabhai Patel, India’s first Home Minister

“Walchand Hirachand was a dreamer, a visionary, a great builder and a great leader of the industry. Above all, he was a patriot, and in his own way, he was an inspiring leader of our struggle for freedom. I salute his memory. The lesson I draw is that the ultimate spur to growth and development is individual creativity and enterprise”. -Dr.Manmohan Singh, Prime Minister of India (2004 – 2014)

“In my opinion in one word. Walchand was the creative genius’
- Dr. A.P.J Abdul Kalam, Former President of India

About our Founder, Visionary Industrialist and Patriot

Seth Walchand Hirachand was a visionary Patriot, who pioneered Industrial revolution in pre-independent India. He stirred the patriotic minds of fellow Indians, to realize the sole aim of his life, which was along with the political freedom from British, was to win back the economic Independence of his motherland. He Renounced the Titles “C.I.E” & “J.P.” conferred by the British, when Mahatma Gandhi is arrested

A man of courage, conviction and self-belief, who envisioned the Industrial needs of Independent India, who in the in the first half of 20th century was one of the two towering persons, who stood out as the pioneering nation builders, who despite all adversities undertook the industrialization of India in various core sectors by their intense passion, patriotism and indomitable spirit of entrepreneurship.

He founded “Hindustan Aircraft Limited” which manufactured planes like Harlow Trainer, Glider, Hawk-P36, Horlow-PC5 etc. Later it was nationalized by Government of India.

On 5th April 1919 the ship “SS Loyalty” sailed on its maiden voyage, a crucial step when sea routes were controlled by the British. 5th April is now celebrated as “National Maritime Day” in India.

Seth Walchand recognized the need of country’s infrastructure for ship building and established a shipyard in. Vishakhapatnam in 1948. The company’s 1st ship “Jal-Usha” was commissioned by India’s first Prime Minister Pandit Jawaharlal Nehru. Later on the shipyard was nationalized by Government of India.

Since 1934 WIL has grown and diversified into a high-tech heavy engineering project execution and manufacturing company across various sectors.